Weinheim, April 13, 2016. Despite challenging conditions, the worldwide technology group Freudenberg was able to continue its successful business development. In 2015, the Group boosted sales to €7,571.6 million (previous year: €7,039.1 million) on the basis of the pro-rata consolidation of joint ventures, representing a rise of €532.5 million or 7.6 percent over the previous year. Adjusted for exchange rate effects, sales grew by 1.6 percent. Sales rose in almost all Business Groups although worldwide economic conditions were difficult, especially in South America and Russia and as a result of slower growth in China. The developments in oil and gas business, mining, the construction industry and agriculture were also challenging.

"We achieved further profitable and sustainable growth and also progressed well with the evolution of our company through a number of strategic projects," said Dr. Mohsen Sohi, CEO of the Freudenberg Group, at the annual press conference held in, Weinheim on Wednesday. "I would like to thank all our 40,000 employees, whose commitment made this success possible." 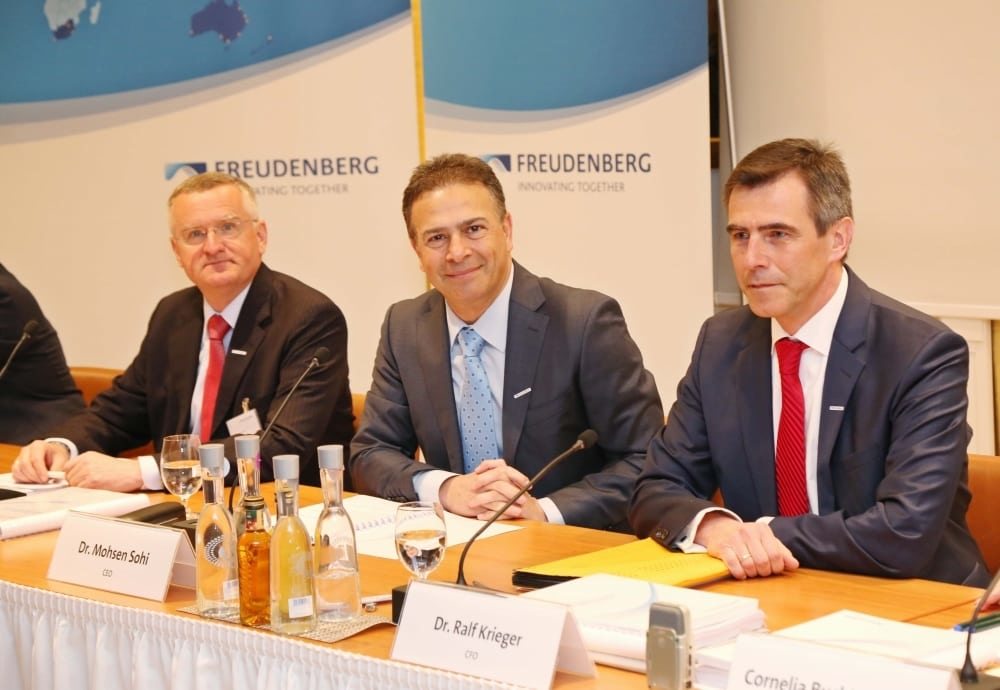 The business figures are based on the pro-rata consolidation of joint ventures as Freudenberg continues to use this method for the management of its operating activities.

Under IFRS financial reporting standards, joint ventures are always consolidated by the equity method. This means that 50:50 joint ventures are not taken into consideration in sales and employee figures. According to this method, sales in 2015 amounted to €6,410.9 million (previous year: €5.982.3 million) €428.6 million or 7.2 percent higher than the previous year.

Cash flow from operating activities rose by €144.7 million compared with the previous year to €762.5 million. "We have again invested vigorously and increased our investment rate to 4.7 percent," said Dr. Ralf Krieger, Member of the Board of Management. Investments in tangible assets in the 2015 financial year amounted to €302.5 million (previous year: €271.6 million). Cash and cash equivalents at year-end amounted to €1,055.7 million (previous year: €917.7 million).

The financial basis of the Group was once again strengthened. With an equity ratio of 51.1 percent (previous year: 48.2 percent), the Freudenberg Group remains in a very good, comfortable equity situation. In its rating published in May 2015, the rating agency Moody's rated the creditworthiness of Freudenberg SE as Baa1 and improved the outlook from "stable" to "positive".

All in all, the Freudenberg Group workforce at year-end on the basis of the equity method totaled 34,007 employees compared with the figure of 34,030 employees for the previous year.

Common corporate understanding and repositioning of the brand

At Freudenberg's four-yearly internal senior management conference, held in Detroit, USA, in July 2015, 320 managers discussed "Entrepreneurship" and "Efficiency" and developed a common understanding of the right corporate and leadership culture for Freudenberg's future success. The event was also used to present the new positioning of the Freudenberg global brand as an innovative technology company with the following benefit statement "Freudenberg is a values-based technology group that best serves its customers and society". The new global brand transports the values and goals of the company. It gives a clear value proposition, strengthens the company's image, and raises the visibility of Freudenberg as an attractive employer. The company slogan "Innovating Together" makes the benefit statement visible to everyone.

This commitment is also clear from the figures.

Freudenberg invested more than ever before in innovation during the year under review; the Freudenberg Group conducted research and development activities in the amount of €315.3 million (previous year:€270.3 million) based on the pro-rata consolidation of the joint ventures. This corresponds to a research and development ratio of 4.2 percent (previous year: 3.8 percent). The objective of all activities is to further increase the share of new products in sales. The share of products less than four years old reached 26.0 percent on the basis of pro-rata consolidation of the joint ventures (previous year: 28.2 percent).

During the year under review, an average of 2,772 employees (previous year: 2,582 employees) were employed in research and development throughout the Freudenberg Group based on the pro-rata consolidation of the joint ventures, with the regional focus in Germany, where 1,573 employees were employed.

"The Business Groups' innovation activities benefit from our materials competence, which is constantly being expanded, among other things via technology platforms," said Sohi, emphasizing the importance of these activities. "We focus on the main cross-sectional technologies of relevance to several Business Groups. They reinforce our innovative strength." In the 2015 financial year, Freudenberg closely addressed five technology platforms: nonwovens, sealing technology, molding, friction/wear & lubrication, and surface technologies. These are knowledge transfer platforms and enable the creation of synergies.

2015 was characterized by the successful implementation of several strategic projects.

A key element of the new strategic planning is the continuous further development of business through product and process innovations in order to grow profitably in existing Business Areas on a scale that significantly outpaces the market. Furthermore, it is planned to develop the portfolio further through selectively targeted acquisitions in all Business Groups, thereby adding identified new technologies and accessing new markets. The successful buy and build strategy in the defined growth areas is to be continued and options are to be leveraged to acquire new areas of business that complement the Freudenberg organization. In the medium term the company aims for a strategically balanced portfolio of cyclical and anti-cyclical business with sales evenly distributed among The Americas, Europe and Asia.

since April 1, 2016, Japan Vilene Company Ltd. (JVC), Tokyo, Japan, has been a new Business Group within Freudenberg's Nonwovens and Filtration Business Area and operates independently in the marketplace. Freudenberg SE and Toray made a joint public tender in 2015 to acquire all common shares in JVC, Tokyo, Japan. JVC was delisted from the stock market on December 25, 2015. The remaining shareholders of JVC are Freudenberg, with a stake of 75 percent, and Toray, with 25 percent.

Other major acquisitions and disinvestments in the 2015 financial year were as follows:

With these two acquisitions, Freudenberg is expanding its portfolio in the field of medical technology.

In total, the Freudenberg Group invested €440.3 million, based on the equity consolidation of joint ventures, including €302.5 million (previous year €271.6 million) in production plant, tangible assets, buildings and intangible assets. For example, Freudenberg Chemical Specialities opened an ultra-modern factory in Mysore, India. In addition, Freudenberg Performance Materials inaugurated a pilot line for testing spunlaids in Kaiserslautern, Germany, and SurTec and Chem-Trend commissioned the new joint location in Valinhos, Brazil. Investments in production halls and site infrastructure at the Oberwihl, Germany, location, and construction of the large new administration building at Weinheim industrial park continued.

We define total success as financial success plus fulfilling our corporate social responsibility. That is a tradition in the company.

The "Sustainability" project initiated by Freudenberg at the end of 2014 addresses how the company can contribute to the sustainable management of natural resources. This has two dimensions. The first is how the company designs its processes and uses its plants to conserve resources. Freudenberg uses the term "footprint" to describe this aspect. The second dimension relates to the numerous products and solutions Freudenberg offers customers to enable them to improve efficiency and sustainability as well as the eco balance of their own products. Freudenberg calls this the "handprint", and the company is seeking to enlarge its handprint for customers.

Social responsibility is more than the commitment that goes with direct entrepreneurial action. That is why a senior management team comprising representatives from all global regions developed the "e²" (education and environment) initiative at the end of 2014. The objective is to give people easier access to education and work, and to encourage environmental protection. We support a broad range of projects from small actions to major education programs in the direct neighborhood of Freudenberg sites.

Apart from a number of other social projects across the globe, the engagement of Freudenberg in projects to help refugees in Germany and Europe illustrates the way that the company brings its understanding of social responsibility to life.

On the basis of pro-rata consolidation of the joint ventures, the Freudenberg Group employed 40,474 people on December 31, 2015 (previous year: 40,456 employees).

As a values-based company, Freudenberg is firmly committed to occupational health, safety and environmental protection, as well as corporate social responsibility. The safety of employees' working environment is a top priority. Here too, Freudenberg achieved further improvements in 2015. The LDIFR value, (accidents at work involving at least one day's absence per million working hours) based on the pro-rata consolidation of the joint ventures was reduced from 1.4 to 1.3. This value indicates top-class occupational safety for an industrial company.

"We can look back with pride on the progress we made during the year under review. We have become more efficient, we have expanded our excellence and leveraged further Group potential. With our new corporate brands, we have become more visible and more attractive in our markets," said Sohi.

The Freudenberg Group started the 2016 financial year with a good order book, although developments in the sectors relevant to Freudenberg are different and global economic conditions are challenging, especially in Russia, South America and as a result of slower growth in Asia.

In total, Freudenberg intends to launch investment projects with a value of €332 million, based on the pro-rata consolidation of the joint ventures. Of this amount, about €90 million are to be invested in tangible assets in Germany, including €30 million in Weinheim.

on the basis of its current assessment, despite all the challenges faced, the Freudenberg Group expects growth in sales between 1.0 and 3.0 percent and profit from operations slightly above the previous year's figure. Almost all Business Groups are likely to contribute to this performance. On the basis of this forecast, Freudenberg expects stable development in its return on sales.

About the Freudenberg Group

Freudenberg is a global technology group that strengthens its customers and society long-term through forward-looking innovations. Together with its partners, customers and the world of science, the Freudenberg Group develops leading-edge technologies, and excellent products, solutions and services for more than 30 market segments and for thousands of applications: seals, vibration control components, nonwovens, filters, specialty chemicals, medical products, IT services and the most modern cleaning products.

Innovation strength, strong customer orientation, diversity and team spirit are the cornerstones of our Group. Commitment to excellence, reliability and pro-active, responsible action belong to the company's core values lived for more than 165 years.

In 2015, the Freudenberg Group employed over 40,000 people in some 60 countries worldwide and generated sales of more than 7,5 billion Euros (including pro-rata consolidation of 50:50 joint ventures). For more information, please visit www.freudenberg.com.